Hiddenstar is described as a handsome cat, known for his muscular build and great height. His fur is a short length, soft to the touch and rather thick and fuzzy. He's a black smoke tabby, his base coat being coal-black, while silver, well-defined mackerel tabby stripes cross his pelt. He has a faint, sharp scent of mint that clings to his pelt, mixed in with the stronger scent of pine. He doesn't have a single dash of white on his oddly colored pelt, though his pale lime-green eyes stand out well on his pelt.

Hiddenstar has a muscular build, with a stronger bone structure of an average thickness. He's in great shape, with large lungs that tend to show under his pelt as he races through his territory. His long, strong legs give him his great height, helping him deliver powerful blows to his enemies. Hiddenstar has notably broad shoulders, helping him swim and what not. His eyes stand out quite well on his attractive pelt, being a bright, lighter shade of green, slowly fading to a lighter shade as they near his pupils. He has a notable scars, a cut in his ear, a larger scar on his shoulder. Hiddenstar has massive, blocky paws, containing sharp claws. His head is larger, fitting his body, slowly tapering into a well-rounded muzzle with a dark nose. His jaw is powerful, quite large and fitting well underneath his muzzle. He has a broader chest, and a fairly long tail.

Hiddenstar has fairly white teeth that are quite healthy, being held in place by strong gums. He stands with his head held high, but not too high, his tail held in a "u" shape. His front legs are held closer together, while his rear legs are farther apart, giving him a "strong" stance, as he calls it. Hiddenstar often wears a smile/smirk on his face, his green eyes revealing his friendliness.

Hiddenstar is well known for his ubdoubtful loyalty and great bravery. In a battle, he's willing to lay his life down for a loyal Clanmate, and face the scariest dog for them. When he has something on his mind, this leader isn't afraid to state it. He'll face and fight just about anything to make sure his Clan is safe. Hiddenstar is certainly a shoulder to lean on if a cat is scared, as he is seen as a role model for cats who wish to be brave and severely loyal to their people. Hiddenstar does love his family dearly, however, his Clan comes first before his brother.

The StormClan leader is quite friendly, and despite his intimidating and attractive looks, has quite a big heart. Deep down, he's always had a slight wanting for kits, but doesn't completely understand what "love" means, though many she-cats are attracted to him. Hiddenstar isn't a cocky tom, and seems to enjoy sharing the wealth of his Clan. However, he seems to be quite competitive, and enjoys having some competition on his life. He's rather adventurous, sometimes a little too curious for his own good. However, this doesn't stop him from exploring and being his daring little self.

Despite being a leader, Hiddenstar isn't the most mature cat in his Clan. He likes to have a little fun with his life, known for being quite humorous. Sometimes, he goes a little too far with his jokes, to the point where he gets slightly sassy. Of course, he is sure to apologize later, once he cools down a bit. Hiddenstar enjoys laughing, happiness is what makes him tick. He loves friend, but again, he doesn't completely understand love, but one special she-cat could certainly make him feel and understand it.

If most she-cats know him for his looks, what do uninterested she-cats and toms know him for? His battling skills. Hiddenstar is a master at fighting, feared by almost all in the forest. He's learned very much from his mentors, especially Phoenix, who taught him moves that most cats don't know. Thanks to his strong build, Hiddenstar's blows are powerful and well-aimed. He also has a knack for attacking the "weak spots" on a cat, his main focus being to inflict as much pain as possible, causing the other cat to flee. He's a well-balanced cat, making pinning others easy. Hiddenstar isn't the best at fighting in trees, however, fighting in the water is quite easy for him, as he's quite talented at swimming.

Thanks to his long legs and webbed paws, Hiddenstar is a phenomenal swimmer. His shoulders and muscular legs give him strong, swift paddles through the water. His fur isn't too long, so it causes no drag, allowing him to navigate easily through stronger currents. Since his pelt is thick, Hiddenstar doesn't get too cold in water. His paw pads are fairly strong and relatively thick, so when he's swimming in the water and his paws hit some sharp rocks, he isn't hurt too much.

Phoenix had other plans. He selected the smoke kitten as his successor, and teached him great things. But the parents of the smoke kit were not pleased...so they set out to kill him. All the meanwhile, Shadow and the smoke kit grew strong, and their bond grew even stronger. They were inseparable, greater than best friends. Of course, they had other friends as well. But as they grew older, their best friend, Sweet, became more than a friend.

The smoke tom had but a tiny crush on her, not feeling much for her yet, while she loved him fully. Shadow was also in love with Sweet, but she did not return the feelings.

Phoenix was slowly dying, and made his smoke successor into a remarkably strong cat. Handsome, muscular, powerful, yet understanding, the perfect leader...but his parents still thought differently. That night, they intended on killing him. Shadow overheard the plans, and warned his brother, who feld from the clowder, moving far away...because something was calling to him.

Feeling like she was missing half of herself, Sweet followed, desperately trying to find the smoke tom. Eventually, she found him, and explained how much she loved him. The smoke tom was hesitant, but slowly found himself falling in love with Sweet as well.

Before long, she was expecting, but was never aware of the fact. She was proud of the smoke tom who defended her well, and gave birth to a single lovely daughter: Foggy. Sweet, however, died from giving birth, breaking the smoke tom's heart.

So his daughter became his world.

The smoke tom doted heavily upon Foggy, teaching her his unique and effective battle moves...but nothing stays the same, not forever. A rogue molly, who lost her litter from illness, stole Foggy away in the night, leaving the smoke tom distressed...he thought his daughter was dead.

Before long, the sorrowful tom finally realized why he was summoned: StarClan wished for him to form and lead ShadowClan. 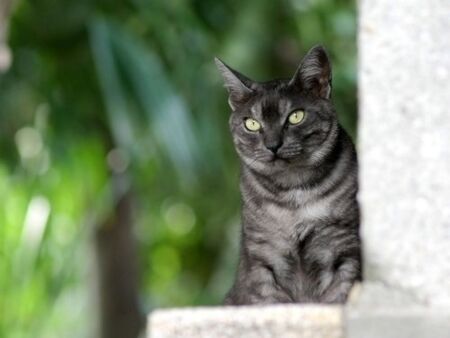 Retrieved from "https://warrior-cats-a-new-dawn.fandom.com/wiki/Hiddenstar?oldid=2725"
Community content is available under CC-BY-SA unless otherwise noted.