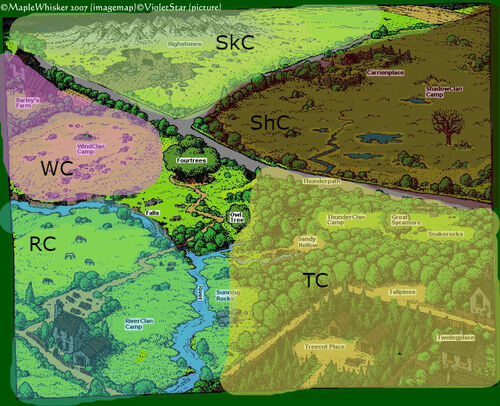 ThunderClan's territory is relatively the same, although currently, they share Sunning Rocks with RiverClan in hopes of avoiding future feudes that their ancestors constantly had. The territory is primarily dominated by deciduous trees, resulting in a bare territory during Leaf-bare, and a colorful territory during Leaf-fall. There are quite a handful of conifers around what used to be the tree-cut place, which was burnt to the ground several years before the Clans were reformed.

As for the twoleg place, it decreased in population after the great fire that ended ThunderClan. It's relatively quiet now, primarily populated by those who only live in the town during Greenleaf. ThunderClan relies on the strong stream near the Sandy Hollow for water.

RiverClan's territory is one of the only pieces of territory that remained the same for the years that passed. It is still extremely green and plentiful with herbs, although it does have the faintest 'stench' from the distant farm. It did, however, increase in numbers, allowing the Clan's members to feel safer, since there are less large farm animals running around. It now consists primarily of sheep, which aren't nearly as dangerous as the animals that used to occupy the territory.

The rivers are deeper, larger, and stronger than they were years ago. The water is now extremely clean and plentiful with fish, although it varies during drought season. RiverClan now shares the Sunning Rocks with ThunderClan. The falls are seen as quite dangerous, and apprentices are usually kept away from them because of how strong they have gotten. Experienced warriors, however, are welcomed near the falls so long as they are careful, for they can easily catch the jumping fish, unless they fall in and drown.

The moorlands now have longer grass than before, making it a bit difficult for cats to run about, until they trod the grass down enough. The territory remains littered with boulders and rabbit tunnels, making hunting quite interesting for the members of the clan. Those unfamiliar with the territory are actually in danger, for they could easily step on a rabbit tunnel and break their neck, or get lost in the tall grass.

But there remains dangers for even those who know the territory like the back of their hand. The river that WindClan depends on for water is extremely powerful and greater than before, slowly feeding into a waterfall. One wrong slip on the bank, and a cat is lost forever.

SkyClan moved back to the territories during Bluestar's time, and StarClan gifted them their own home. Rather than returning to their original territory, StarClan gifted SkyClan the Highstones as their home. They are, however, forbidden to enter Mothermouth without permission from StarClan, and any Clan may enter their territory if they wish to visit with StarClan.

Camp is not located on the Highstones, rather on the grassy plains. StarClan gifted the Clan with many deciduous trees, so they may hunt birds and squirrels, as well as practice their climbing. Water is gathered near the Highstones, from a small river.

Retrieved from "https://warrior-cats-a-new-dawn.fandom.com/wiki/Territories?oldid=530"
Community content is available under CC-BY-SA unless otherwise noted.